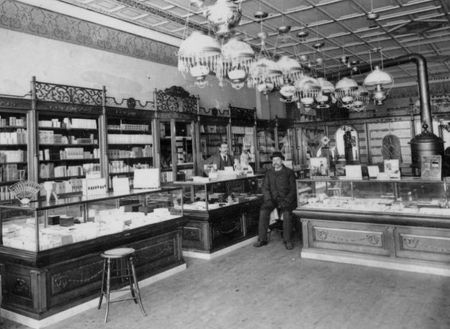 Chenoa Pharmacy began as Schuirmann’s Drug Store in 1889, founded by Tido “Carl” Schuirmann and Henry Hops. Hops sold his share of the business in 1909, Carl’s daughter Emma and her husband took over the store upon his death in 1930.

The building still retains the original wood floors, detailed wooden cabinetry along both side walls, and tin ceiling. Poster sized photos of the original store line the top walls.

Since its beginning in 1889, Chenoa Pharmacy has only had 4 owners. The Schuirmann Family as detailed above followed by Wes Harris until 1978, Dan Boian from 1978-2015, and most recently and currently Rob Taveggia.

Photos below are courtesy of the Illinois Route 66 Association.